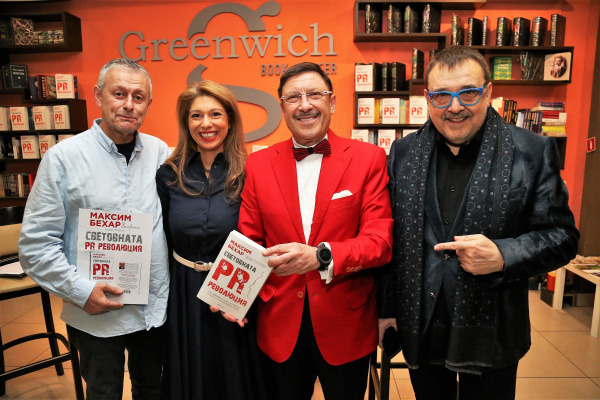 One of the best PR books in the world at the moment is already in Bulgaria”! The official premiere of “The Global PR Revolution” by Maxim Behar was held in Greenwich Book Center in Sofia. Hundreds of guests, including managers of large companies, diplomats, journalists, representatives of the academia and the show business, attended the event and became part of the exciting world of communications.

“The Global PR Revolution: How Thought Leaders Succeed in the Transformed World of PR“ was presented by Solomon Passy, President of The Atlantic Club of Bulgaria, Prof. Lyubomir Stoykov, PR and media expert, and Victoria Biserova, CEO of “Enthusiast” Publishing, by which the book was published in Bulgaria.

“The Global PR Revolution” by Maxim Behar has incredible success in the USA, where it was initially published. It quickly became a favorite read of both people from the branch and other book lovers who want to enrich their knowledge. The book offers a unique view of the world of communications, as it contains the opinions of 100 of the most influential PR experts from 65 countries on 6 continents.

In Bulgaria, “The Global PR Revolution” was published by “Enthusiast” Publishing. The book was released in December and its first edition in the country was out of stock for less than a month.

“The Global PR Revolution” quickly conquered the USA and Bulgaria. For sure, it will soon take the whole world over!